Posted by Ameri on April 11, 2012 in Uncategorized

The House of Representatives Definition of “Natural Born Citizen” = Born of citizen “parents” in the US. 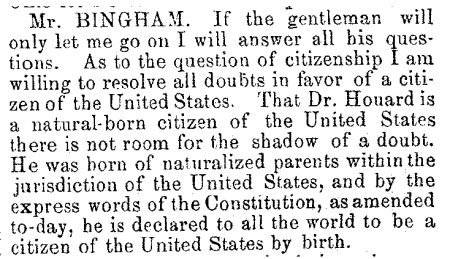 During a debate (see pg. 2791) regarding a certain Dr. Houard, who had been incarcerated in Spain, the issue was raised on the floor of the House of Representatives as to whether the man was a US citizen.  Representative Bingham (of Ohio), stated on the floor:

Notice that Bingham declares Houard to be a “natural-born citizen” by citing two factors – born of citizen parents in the US.

John Bingham, aka “father of the 14th Amendment”, was an abolitionist congressman from Ohio who prosecuted Lincoln’s assassins.  Ten years earlier, he stated on the House floor:

“All from other lands, who by the terms of [congressional] laws and a compliance with their provisions become naturalized, are adopted citizens of the United States; all other persons born within the Republic, of parents owing allegiance to no other sovereignty, are natural born citizens. Gentleman can find no exception to this statement touching natural-born citizens except what is said in the Constitution relating to Indians.” (Cong. Globe, 37th, 2nd Sess., 1639 (1862))

Then in 1866, Bingham also stated on the House floor:

“Every human being born within the jurisdiction of the United States of parents not owing allegiance to any foreign sovereignty is, in the language of your Constitution itself, a natural born citizen.” (Cong. Globe, 39th, 1st Sess., 1291 (1866))

Furthermore, the Supreme Court’s holding in Wong Kim Ark did not address Presidential eligibility, nor did it define “natural born citizen”.  It simply clarified who was a “citizen”.  Had the framers of the 14th Amendment sought to define nbc, they would have used the words “natural born” in the Amendment.  But they didn’t.

Do not allow the opposition to state this definition as “Vattel’s definition”.  Challenge that tactic every time.  Vattel didn’t make it up.  His text on the law of nations compiled known existing law.  Vattel was not a legislator.

It is proper to say, with regard to US Constitutional law, that this was the House definition as stated on the floor by Representative Bingham.  And this definition was never opposed on the floor.  And that is exactly where it should have been opposed if it were not the truth.

Debate upon issues of Constitutional law such as this belong on the House floor.  And when an issue this important comes before the nation on the floor of  “the people’s House”, and the issue is not challenged by any Representative of the people, then it’s certainly proper to infer that the House of Representatives, as a whole, agreed with that definition.  After all, our nation is governed by debate on the floor of the House.  But there never was debate on this issue because it was a proper statement of Constitutional law.

The definition of natural born citizen as stated on the House floor = born in the US to parents who are citizens.  It’s not like those cats were incapable of correcting each other’s mistakes.  Since no Supreme Court case ever stated a different definition of “natural born citizen”, and no Represenative ever challenged Bingham on this point, the House definition stands and officially remains unchallenged as of today.  If the House wants to change this definition, let them bring the issue to the floor now and properly debate it.

Until then, call it the House of Representatives definition as offered by the father of the 14th Amendment who was never challenged upon it.

Don’t let history be rewritten by propagandists.  The evidence is mounting on a daily basis that the current Commander In Chief is not eligible to hold the office of President.  You have a voice.  You have freedom of speech.  You have access to your federal and state representatives.

The courts don’t want to hear from you.

So find someone who must to listen to you and be heard.  The Constitution cannot survive unless you breath life into it. We are responsible to future generations.  Do something with that responsibility.  Use the law.  Obey the law.  Respect the law.  Fight for the law.

by Leo Donofrio, Esq.  (hat tip to my main researcher who shall remain anonymous for now…)

← Hey..It’s Me…Kim Marie…
Worst President Ever Number of the Day: $1.15 Trillion And why Obamacare and Romneycare are Fundamentally Different →