The Obama campaign has released a new web ad that lists every apparent accomplishment of the president’s three years in office. The seven minute spot begins by showing how bad the economy was when the president took office, and suggests that President Obama saved America with the stimulus, the auto bailout, guaranteed contraception, the Lilly Ledbetter Act, Obamacare, killing Osama bin Laden, and more: There are a number of curious claims, but there’s a point when the narrator says, “Some said America’s best days were behind us,” that’s likely going to make one group of Americans feel that they’re being singled out. Because it’s at that point in the ad that the Obama campaign flashes images of Tea Party protests, such as this one: 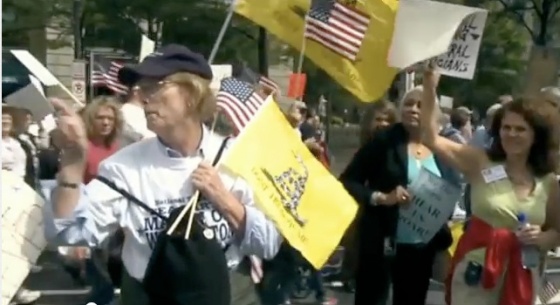 via Obama Campaign Takes on Tea Party | The Weekly Standard.

← CNN Host Shocked That Young Female Student Not Indoctrinated…Has Mind of Her Own!
In Search Of: People of Color →