Obama Desperately Wants Romney to Show More Tax Records. How about a Trade? Tax Records for These Documents…

The Obama camp and the leftist media keep demanding that Mitt Romney release MORE tax returns (he already released the required amount during the primary campaign) suggesting that Mitt Romney is a “Felon”, yet they REFUSE to hold Obama to the same level of scrutiny.  Here we are, 4  years later and we STILL have yet to see these documents from Obama Camp. Why is Obama not held to the same standards? What is he hiding?  WHO IS THE FELON? 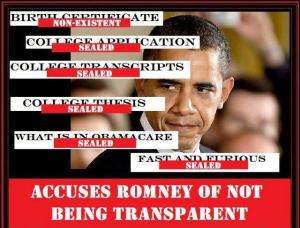 Here is a list of the Top Ten things Obama Has Not Released: H/T Joel Pollack @Breitbart.com

10. State senate papers. In the 2008 primary, Obama criticized Hillary Clinton for not releasing papers from her eight years as First Lady–but failed to produce any papers from his eight years in Springfield. “They could have been thrown out,” he said.

9. Academic transcripts. His supposed academic brilliance was a major selling point, but Obama (by his own admission) was a mediocre student. His GPA at Occidental was a B-plus at best, and his entering class at Columbia was weak. Can he prove his merit?

8. Book proposal. Obama’s literary agent claimed he was “born in Kenya”–for sixteen years. His original book proposal exists–biographer David Maraniss refers to it–and seems to have embellished other key details of his life. Yet it has never been released.

6. Small-dollar donors. In 2008, the McCain campaign released the names of donors who had contributed less than $200, though it was not required to do so. But the Obama campaign refused, amidst accusations it had accepted illegal foreign contributions.

5. The Khalidi tape. In 2003, Obama attended a party for his good friend, the radical Palestinian academic Rashid Khalidi. The event featured incendiary anti-Israel rhetoric. The LA Times broke the story, but has refused to release the tape–and so has Obama.

4. The real White House guest list. Touting its transparency, the Obama White House released its guest logs–but kept many visits secret, and moved meetings with lobbyists off-site. It also refused to confirm the identities of visitors like Bertha Lewis of ACORN.

3. Countless FOIA requests. The Obama administration has been described as “the worst” ever in complying with Freedom of Information Act requests for documents. It has also punished whistleblowers like David Walpin, who exposed cronyism in Americorps.

2. Health reform negotiations. Candidate Obama promised that health care reform negotiations would be televised on C-SPAN. Instead, there were back-room deals worth millions with lobbyists and legislators–the details of which are only beginning to emerge.

1. Fast and Furious documents. After months of stonewalling Congress, Attorney General Eric Holder asked President Obama to use executive privilege to conceal thousands of documents related to the deadly scandal–and Obama did just that.

In addition to the above, Obama and his campaign have lied about many facts about his past–his membership in the New Party; his extensive connections with ACORN; and his continued relationship with domestic terrorist Bill Ayers and Jeremiah Wright, among other examples. Obama’s own memoir is filled with fabrications. And now he is lying about his opponent’s honorable record in business. He–and the media–have no shame.

← After 4 Years of Being Torn Down..It’s Time to Rebuild America
My Prayers Are With Aurora Colorado… →